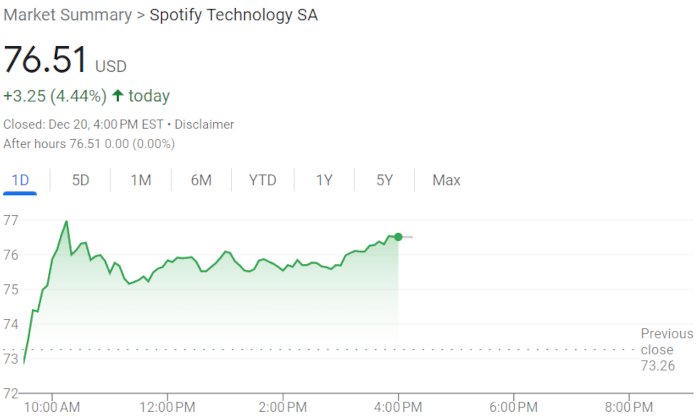 Morgan Stanley has once again sliced its Spotify stock (NYSE: SPOT) target price, this time to $105 per share.

New York City-headquartered Morgan Stanley recently disclosed its updated Spotify stock target price (which decreased from $115) in a note to investors. For reference, the firm in April reduced the same target from $300 to $225, before SPOT (amid a valuation falloff that affected a number of entertainment and tech stocks) plummeted to a record low of $69.28 in November.

Since then, Spotify stock – into which Daniel Ek has poured a substantial sum this year – has rebounded slightly, including to a per-share price of $76.51 when the market closed today. The latter value signifies a roughly 69 percent plunge from 2022’s beginning.

The Stockholm-based company reported a 20 percent year-over-year jump in monthly active users (456 million total) for Q3 2022, besides a 21 percent YoY revenue improvement. But its operating loss swelled to $242.13 million (€228 million) during the three-month stretch, and SPOT parted with a substantial portion of its worth immediately following the corresponding performance breakdown’s release.

Notwithstanding these points, Morgan Stanley evidently believes that the value of SPOT could potentially increase in the new year, for the initially noted (decreased) $105 target price reflects an approximately 37 percent upside from Spotify stock’s current position.

Morgan Stanley has also attached an “overweight” rating to Spotify stock, and separately, Rosenblatt Securities decreased its SPOT target price from $112 to $87 last month, after Evercore did the same (albeit with a target price of $175, down from $230) towards October’s conclusion.

Moving forward, it’ll be worth monitoring the trajectory of Spotify stock, particularly as the streaming mainstay builds out its audiobook offering, pursues podcasting profitability, and, most significantly, prepares to raise its prices in 2023.

It bears highlighting in conclusion that Spotify (which has axed several podcasts and laid off multiple team members this year) has in 2022 started selling tickets to in-person concerts, branched out into gaming and trivia, tested the NFT waters, and hosted live sets (on top of artist events). Of course, logic suggests that these and other initiatives will play a key role in the entity’s plans to grow revenue in 2023 and beyond.

In related news, the stock of Middle Eastern streaming service Anghami (NASDAQ: ANGH) today dipped to an all-time-low price of $1.61 per share before regaining some ground to finish the day at $1.84 per share. This closing value marks a nearly 82 percent decline for ANGH since 2022’s beginning, and it’s unclear whether the business’s rumored sale to Spotify will in fact come to fruition.